Review of Will's recent solo show at Centro in Manchester. 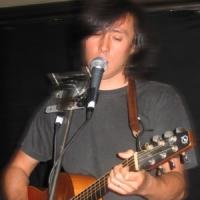 Sunday night and the Centro basement is largely full of the loud chatter of what looks like the tail end of a rugby team's weekend pub crawl. A quiet and polite young man stands behind a microphone, armed only with an acoustic guitar and a harmonica. Fazed by the potentially difficult crowd? Not likely - how many local singer-songwriters can claim, genuinely, to have worked with Jackie Chan? Will Tang has a rather more interesting back story than his youthful looks would suggest. As a young man, he left his Rochdale home and headed east to chase the Chinese side of his heritage, where he ended up playing sessions for all manner of pop and film stars and releasing five albums. So a few rowdy lads in sportswear aren't going to put him off.

From the first notes of his finger-picking, foot-tapping blues it's clear he's pretty talented. His vocals are a little more high pitched than your average bluesman, more Dylanish rasping than the Muddy Waters whose influence is apparent in his songwriting - breathless even at times, like he's racing against himself. And then he plays his ace, steps forward to the mikestand-mounted harmonica, It's nothing short of stunning; virtuoso standard. I didn't even know it was possible to get that many notes out of one. And this he accomplishes whilst looking almost effortless, finishing the tune with an intricate guitar flourish. Forget the fresh face, this is definitely a man who's paid his dues.

"Everything Changes" is probably the most commercial song in this short showcase set; troubadour acoustic folk-blues that's at the same time tuneful enough for mainstream radio. "Coldplay" mutters one of the short-hairs, which we think might actually be a bizarre form of compliment, although I don't see it myself. Yet Tang is a man who could have a broad appeal - even in the space of five or six songs he's stamped his own touch on a myriad of styles. "Lay Your Troubles Down" starts like Mojave 3 country-indie before soaring off into a soul-searching crescendo, whilst "Red City Blues" is a more traditional story of a young man coming to the big city to find himself. Yet for all his remarkable talent, he seems very much down-to-earth. Just an ordinary lad from Rochdale with an extraordinary tale to tell, and one I think we'll be hearing quite a lot more from.