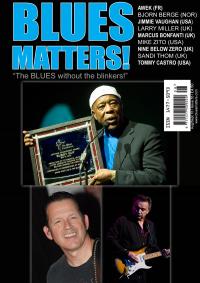 With Will Tang, you are warned from the start. This album is dedicated to Blues and nothing but Blues. Its a Blues recorded live and theres no. Its a spontaneous Blues which is so roots, it could have been of a pre-war vintage. The son of Chinese and British parents, Will Tang is one of those musicians who knows how to make the links between cultures and eras. He knows how to mix the Blues of today with the Blues of yesterday. A songwriter, singer, guitarist and harmonica player, Will Tang is part of that generation who has embraced the Blues heritage from the cotton pickers who sang about love, about their dreams and their lives. Under the influence of the likes of Muddy Waters, Jimi Hendrix and Eric Clapton, Will Tang doesnt play the Blues, he lives it, draws every single breath from it to and you cant help but feel all those vibrations. All the recorded tracks are totally improvised, musically and lyrically, and were recorded in various clubs and studios in Hong Kong. Five of them, were recorded live at the Avon Studios in October 2002 and have not been released before. Throughout virtually all thirteen tracks, Will Tang, on vocals and harmonica, is accompanied by Patrick Murdoch on guitar except for The Other Side. On this track, Will Tang not only sings but also plays guitar and harmonica. With this album, you enjoy a live performance of a different kind, its spontaneous and completely improvised.