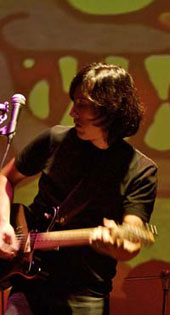 That Will Tang has got the blues goes without question. But thats only a fraction of the story; with a six-album career and an international reputation as a harmonica maestro, audiences and critics from across the genre boundaries are singing his praises. The simple fact is Will Tang is a roots musician, and by continually exploring his unique personal roots, he continues to surprise and to defy simplistic categorisation.

"Will Tang is a Blues culture shock, and a definite asset to the future of Blues"
Blues Matters!

In an era of wannabe-troubadours, Will Tang is the real thing. Born in Rochdale to British and Chinese parents, he was blessed with a broader world perspective from a young age, and throughout his youth, exposed to their classical music influences. "My dad used to play in the Hong Kong Philharmonic and granddad was a minister who played the church organ."
Will's true revelation came, however, when he picked up harmonica and met the blues through local blues festivals in Colne and Burnley. "It was only then that I realized the profound influence of the blues, taking me on a musical journey from it's African roots through rock'n'roll, soul, rock and jazz, it soon became evident that most of today's music owed something to the blues"

Once he left school, he turned his back on a promising career as an engineer and headed for Hong Kong to explore the other side of his heritage.
While not a place renowned for its music, Will discovered a late-night underground jazz and blues scene which he soon became part of. Creating quite a stir with a sound and style unheard of on the scene, his lucky break came when he was asked to play harmonica on a record that later became a chart hit. This opened the door for him as a session musician; playing for Chinese film and pop stars such as Jackie Chan and Andy Lau, and even travelling around the region to play with artists such as Simon Le Bon.

He soon secured himself a record deal (making him the first blues harp player to be signed in Hong Kong) and released his first album - which included tracks with renowned guitarist Tommy Emmanuel. Will went from jamming in bars to playing 10,000-seater concert halls alongside local pop stars. He also gigged relentlessly with his own band throughout Asia. "I evolved hugely as a performer, learning new instruments and styles, and found my natural spontaneity and freedom of expression in improvisational music like jazz, blues and rock"

"Will Tang? He's a singer, harmonica player and songwriter who wails like Robert Plant and plays harmonica like only blues cats can"
HK Magazine

After releasing four more albums, the harmonica maestro decided it was time to return home. Things appeared to have come full circle when he was given his own chance to appear at Colne blues festival, as well as share a line-up with Deep Purple at the Zinc dAutour blues festival in Beauvais, France. But Wills time overseas had filled him with a hugely expanded set of influences and he was keen to explore the eclecticism and musical freedom that the UK offered. He quickly secured a deal with Zen Music, an ISP-sponsored record label, keen to use new media to reach out to new audiences. His next task was to find a creative partner who would enable him to announce his return with a bang.
This partner came in the form of veteran Manchester DJ and producer Andy Votel (Elbow, Badly Drawn Boy) who helped produce and remix his first UK single 'Love Bites'.  The release received great reviews and made playlists at XFM and Ministry of Sound, demonstrating his ability to cross genre boundaries and appeal equally to audiences young and old.  The accompanying video was an animation by upcoming director Marc Hardman that could easily have come from Terry Gilliam himself, and was play-listed on MTV among others.

"Forget what Gomez thought was the blues.  You can even by-pass the 22-20s take on the genre.  If you want a fresh interpretation, look no further than this"
Angry Ape

Determined to build on this success, Will went back into the studio to record a new album. To add a new twist he recruited his old Hong Kong band mate, Patrick Murdoch (who had returned to the UK a few years earlier to work as a session player for artists such as Michael Jackson) and the rest of Murdoch's new project, Big Linda, a hard rock outfit from London (recently signed to Sony-ATV). They relished the opportunity to put their alter-egos to work with Will to bring his eclectic roots-acoustic tracks to life. "I wanted to keep it sounding fresh so we recorded old-school, you know, mostly live, and even brought in some different instrumentation to give it a 'world' feel."
These tracks went onto become his UK debut, 'Everything Changes', which was released through Zen Music in November 2007 and achieved critical acclaim in the mainstream music press. "It's a mix of new and old material, of rock and pop, blues, funk and reggae that kind of sums up where I'm at right now." The album was launched with a string of live appearances, taking in arts centres and academies nationwide, including a support for US blues legend, Alvin Youngblood Hart.

"Elements of Jack White's theatrical flourish, a bit of Ray LaMontagne's pastoral hush, but most of all, there's just lots of Will Tang, an ordinary lad from Rochdale with a quite extraordinary story to tell"
Manchester Evening News

The album's broad appeal led to tracks being used in movie soundtracks on both sides of the Atlantic, but once the tour was over, Will took time to focus on renewing his cultural ties in the UK. He proudly represented contemporary British Chinese art forms by headlining Chinese New Year events in Manchester, Liverpool and London, and began to engage with community projects for young creative groups in Rochdale.

Now 'travellin' man Tang' is ready to hit the road again to launch 'The Other Side', the first single taken from 'Everything Changes'.
It's already had a fantastic response with plays on BBC Radio 2 by Bob Harris - "great track!" - As well as Gideon Coe, Paul Jones and Don Letts.
The Guardian, Uncut and Q Magazine were also quick to pick up on Will's "tasty harmonica blowing".
And music TV has promised playlists for the upcoming new video, again directed by Marc Hardman. A distinctive Hardman style blend of real footage and animation, something reminiscent of Pink Floyd's The Wall and The Beatles' Yellow Submarine.

Join Will and his band as his journey continues by coming along to one of his shows and experience his intimate performance style first hand.