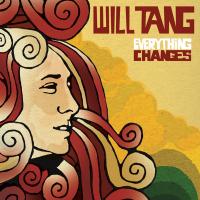 Everything Changes is Will's sixth independent release, but is his first UK debut and first release through Zen Music.  Here's Will with a whistlestop tour of what to expect from the album...

"It's a mix of new and old material that kind of sums up where I'm at right now. I wanted to keep it sounding fresh so we recorded old-school, you know, mostly live. It's just the best when you're all playing together and you can capture that moment when you know you've got something going on".

"The optimistic pop opener, Everything Changes, is inspired by a Buddhist philosophy of life's change.  The gentle contemplativeness of Drifting and the thought-provoking Stories, are contrasted by aggressive Zeppelin-esque rock on The Other Side, a protest about war, and the be-bop tinged blues of Time of Day."

"Toning down a bit, the album version of Love Bites adds a touch of funk with a John Lee Hooker type guitar riff, and the comforting acoustic ballad On My Way, a song about lovers' separation, has a Damien Rice feel. This album's epic track is surely Red City Blues, a song about a young Native American brave who leaves his home and heads for the big city seeking his fortune: here, reggae rhythms blend with rock guitars and a searing Hammond - think somewhere in the ball-park of Sting meets the Doors."

"Not complete without a little humour, Something Special is a song which I wrote after a telephone conversation with my daughter; its uplifting Paul Simon vs. Buena Vista Social Club world flavour is surely a winner for many parents!  Troubles Down is also guaranteed to raise a smile with its easy-come, easy-go attitude and sunny day, cruising with the top down, country style."

"Closing the album is a solo harmonica piece called Sundown, just perfect for the end credits and riding off into the sunset!"